"Hardening of the software arteries" has occurred by using subclassing of an abstract base class to provide alternative implementations. This locks in compile-time binding between interface and implementation. The abstraction and implementation cannot be independently extended or composed.

Consider the domain of "thread scheduling".

There are two types of thread schedulers, and two types of operating systems or "platforms". Given this approach to specialization, we have to define a class for each permutation of these two dimensions. If we add a new platform (say ... Java's Virtual Machine), what would our hierarchy look like?

The Bridge design pattern proposes refactoring this exponentially explosive inheritance hierarchy into two orthogonal hierarchies – one for platform-independent abstractions, and the other for platform-dependent implementations.

The interface object is the "handle" known and used by the client; while the implementation object, or "body", is safely encapsulated to ensure that it may continue to evolve, or be entirely replaced (or shared at run-time.

Use the Bridge pattern when:

Bridge is a synonym for the "handle/body" idiom. This is a design mechanism that encapsulates an implementation class inside of an interface class. The former is the body, and the latter is the handle. The handle is viewed by the user as the actual class, but the work is done in the body. "The handle/body class idiom may be used to decompose a complex abstraction into smaller, more manageable classes. The idiom may reflect the sharing of a single resource by multiple classes that control access to it (e.g. reference counting)."

The Client doesn't want to deal with platform-dependent details. The Bridge pattern encapsulates this complexity behind an abstraction "wrapper". 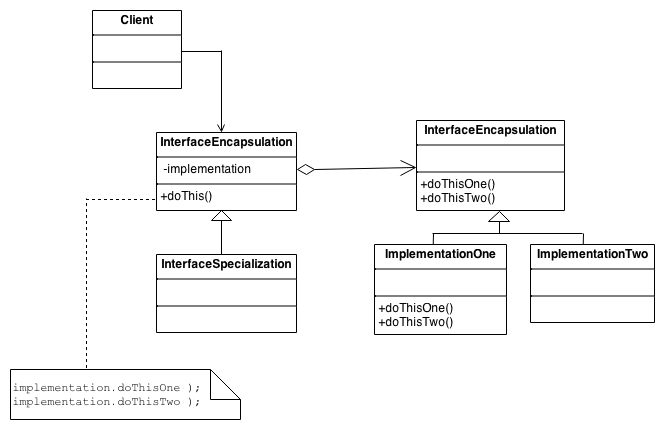 The Bridge pattern decouples an abstraction from its implementation, so that the two can vary independently. A household switch controlling lights, ceiling fans, etc. is an example of the Bridge. The purpose of the switch is to turn a device on or off. The actual switch can be implemented as a pull chain, simple two position switch, or a variety of dimmer switches. 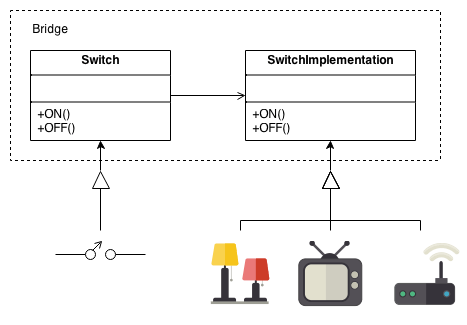