An "off the shelf" component offers compelling functionality that you would like to reuse, but its "view of the world" is not compatible with the philosophy and architecture of the system currently being developed.

Reuse has always been painful and elusive. One reason has been the tribulation of designing something new, while reusing something old. There is always something not quite right between the old and the new. It may be physical dimensions or misalignment. It may be timing or synchronization. It may be unfortunate assumptions or competing standards.

It is like the problem of inserting a new three-prong electrical plug in an old two-prong wall outlet – some kind of adapter or intermediary is necessary.

Adapter is about creating an intermediary abstraction that translates, or maps, the old component to the new system. Clients call methods on the Adapter object which redirects them into calls to the legacy component. This strategy can be implemented either with inheritance or with aggregation.

Adapter functions as a wrapper or modifier of an existing class. It provides a different or translated view of that class.

Below, a legacy Rectangle component's display() method expects to receive "x, y, w, h" parameters. But the client wants to pass "upper left x and y" and "lower right x and y". This incongruity can be reconciled by adding an additional level of indirection – i.e. an Adapter object. 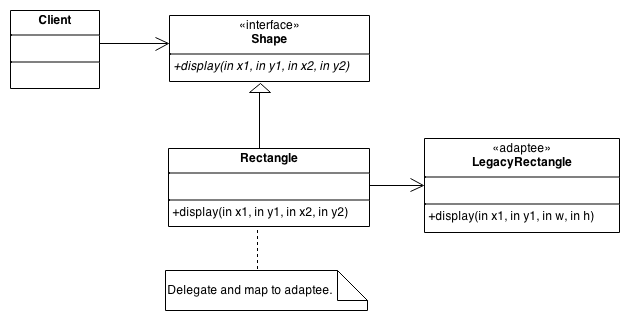 The Adapter could also be thought of as a "wrapper".

The Adapter pattern allows otherwise incompatible classes to work together by converting the interface of one class into an interface expected by the clients. Socket wrenches provide an example of the Adapter. A socket attaches to a ratchet, provided that the size of the drive is the same. Typical drive sizes in the United States are 1/2" and 1/4". Obviously, a 1/2" drive ratchet will not fit into a 1/4" drive socket unless an adapter is used. A 1/2" to 1/4" adapter has a 1/2" female connection to fit on the 1/2" drive ratchet, and a 1/4" male connection to fit in the 1/4" drive socket. 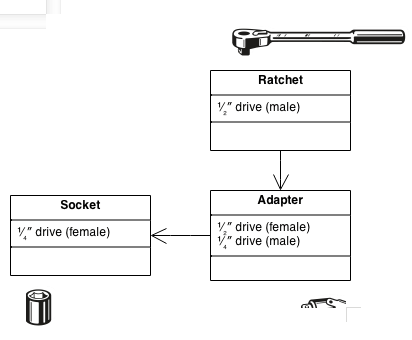