Need to issue requests to objects without knowing anything about the operation being requested or the receiver of the request.

Command decouples the object that invokes the operation from the one that knows how to perform it. To achieve this separation, the designer creates an abstract base class that maps a receiver (an object) with an action (a pointer to a member function). The base class contains an execute() method that simply calls the action on the receiver.

All clients of Command objects treat each object as a "black box" by simply invoking the object's virtual execute() method whenever the client requires the object's "service".

A Command class holds some subset of the following: an object, a method to be applied to the object, and the arguments to be passed when the method is applied. The Command's "execute" method then causes the pieces to come together.

Sequences of Command objects can be assembled into composite (or macro) commands.

The client that creates a command is not the same client that executes it. This separation provides flexibility in the timing and sequencing of commands. Materializing commands as objects means they can be passed, staged, shared, loaded in a table, and otherwise instrumented or manipulated like any other object. 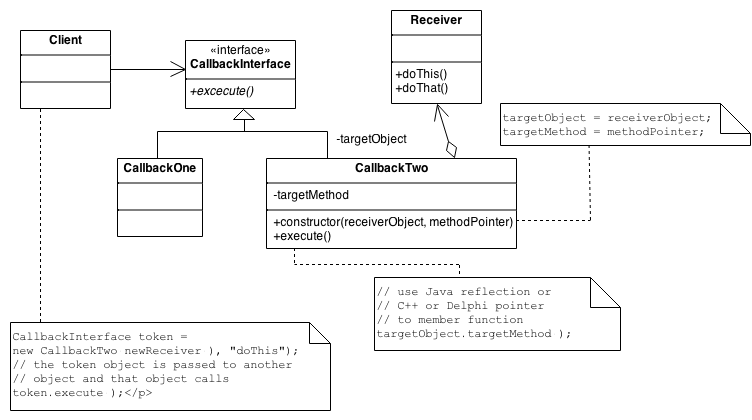 Command objects can be thought of as "tokens" that are created by one client that knows what need to be done, and passed to another client that has the resources for doing it.

The Command pattern allows requests to be encapsulated as objects, thereby allowing clients to be parametrized with different requests. The "check" at a diner is an example of a Command pattern. The waiter or waitress takes an order or command from a customer and encapsulates that order by writing it on the check. The order is then queued for a short order cook. Note that the pad of "checks" used by each waiter is not dependent on the menu, and therefore they can support commands to cook many different items. 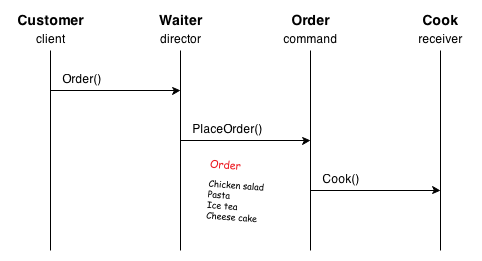