Two different components have significant similarities, but demonstrate no reuse of common interface or implementation. If a change common to both components becomes necessary, duplicate effort must be expended.

The component designer mandates the required steps of an algorithm, and the ordering of the steps, but allows the component client to extend or replace some number of these steps.

Template Method is used prominently in frameworks. Each framework implements the invariant pieces of a domain's architecture, and defines "placeholders" for all necessary or interesting client customization options. In so doing, the framework becomes the "center of the universe", and the client customizations are simply "the third rock from the sun". This inverted control structure has been affectionately labelled "the Hollywood principle" - "don't call us, we'll call you". 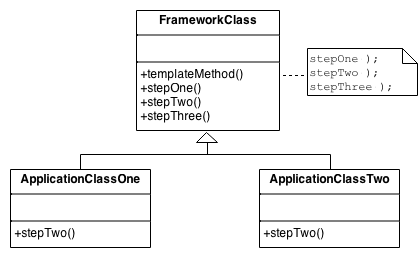 The implementation of template_method() is: call step_one(), call step_two(), and call step_three(). step_two() is a "hook" method – a placeholder. It is declared in the base class, and then defined in derived classes. Frameworks (large scale reuse infrastructures) use Template Method a lot. All reusable code is defined in the framework's base classes, and then clients of the framework are free to define customizations by creating derived classes as needed. 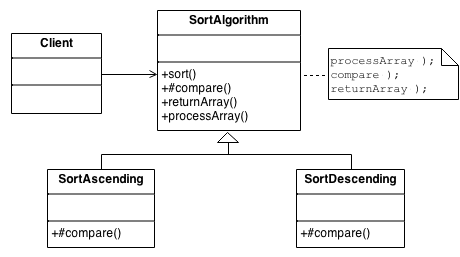 The Template Method defines a skeleton of an algorithm in an operation, and defers some steps to subclasses. Home builders use the Template Method when developing a new subdivision. A typical subdivision consists of a limited number of floor plans with different variations available for each. Within a floor plan, the foundation, framing, plumbing, and wiring will be identical for each house. Variation is introduced in the later stages of construction to produce a wider variety of models.

Another example: daily routine of a worker. 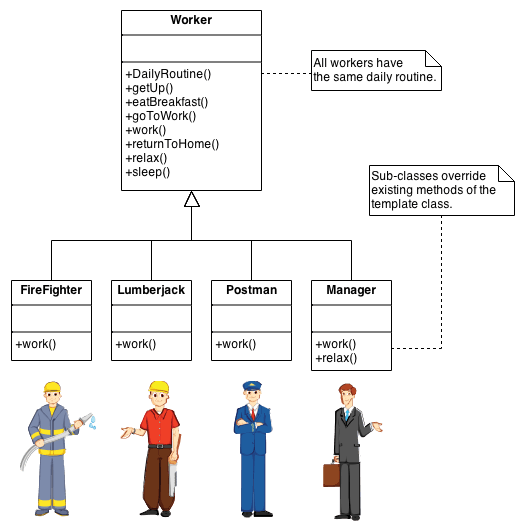